Play is recognized as an important vehicle for developing all aspects of a child in kindergarten because it provides a functional and meaningful setting for appropriate development. Incorporating games and dramatizations into a kindergarten mathematics curriculum is associated with better academic skill development and conceptual thinking. This article tells how a teacher tries to create a playful math curriculum.

In many schools across the nation, kindergarten has become a very rigid environment leaving little to no time for children to explore learned concepts. Five-year-olds are expected to sit at a desk to participate in skill-and-drill exercises with an emphasis on monotonous homework.

As a kindergarten teacher, I was not pleased with the way my students were learning, especially when it came to math. Most students were not gaining a conceptual understanding of the material; rather students were memorizing symbols and algorithms (which frankly, meant nothing to them). Although students were able to learn mathematics in the classroom, they were unable to use the concepts in a real world setting.

What Happened to Kindergarten?

In 2009, the Alliance for Childhood released a report on the crisis facing kindergarten. The authors of the report stated that kindergarten had changed dramatically since the late 1980's. During that time, kindergarten classrooms often had plenty of space allocated to unstructured play, discovery, and practicing social skills. These are elements that helped children learn how to enjoy learning.

Currently, children spend far more time being taught and tested on literacy and math skills than they do learning through play and exploration, exercising their bodies, and using their imaginations. Many kindergarten teachers are required to use scripted curricula which teachers are not encouraged to deviate from. Similar teaching methods violate long-established principles of child development and good teaching. The achievements made by these programs come at the expense of other skills children need to learn such as self-reliance, problem-solving, and spatial thinking (Miller & Almon, 2009).

Children must learn what their brains are developmentally ready to absorb (Miller & Almon, 2009). Students are unable to use the traditional classroom mathematics in the real world because they do not possess a conceptual understanding of the material (Boaler, 1998). Students are less likely to foster imaginative thought and problem-solving in this traditional and structured environment. 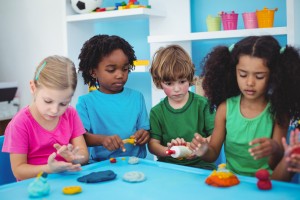 Incorporating games and dramatizations into a mathematics curriculum allow for students to receive developmentally appropriate mathematics instruction. The incorporation of play guides the curriculum toward work that does not simply reproduce knowledge, but uses knowledge in authentic intellectual ways which tap into students' depth of knowledge - creating a deeper understanding of the content being taught. Integrating games and dramatizations into the lessons builds on students' experiences and knowledge. This kind of work supports higher levels of cognition and student engagement, and also raises students' intrinsic standards.

To take matters into my own hands, I experimented with my set of students. In a small attempt to tackle this large problem, 16 kindergarten students engaged in five days of addition and subtraction practice. On the first day, traditional tasks (algorithms) and methods were utilized, students were then assessed. On the second, third, fourth, and fifth days traditional teaching and learning practices were substituted with methods of learning through play and dramatizations. At the end of the fifth day, students were assessed again. The two assessments were compared and analyzed.

All in all, I realized that play does indeed have a place in the kindergarten classroom. The incorporation of play guided the content toward work that did not simply reproduce knowledge, but used knowledge in authentic and intellectual ways. Students were able to create deeper understandings of addition and subtraction when play was integrated. 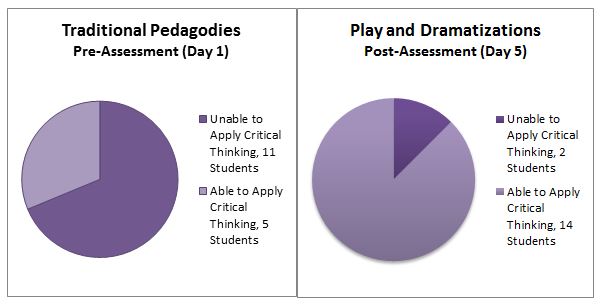 My name is Salpy Baharian. I have a Clear Multiple Subject Teaching Credential as well as a Master's Degree in Education, with a specialization in Curriculum and Instruction. I am the co-founder of Teacher.org and have taught kindergarten for many years. As an educator, I strive to create authentic learning experiences for students in order to motivate them to excel at their highest potential.